Hosting by FusionLink
Josh Adams's Blog
All views expressed on this blog are my own and do not carry the endorsement of anyone, including my employer.

Eh...sorry if the title of this post is a little hard to read--it's because I really want others to be able to find this info when they do an Internet search 'cause I sure couldn't find any info about anything like this!

I wanted a way to hang/hook/hold/stick/mount/something! my portable hard drive onto the back of my MacBook Pro's lid/top/case/display/whatever. I wanted something that I could attach and remove quickly and easily and that, when removed, wouldn't leave any traces of its presence on the laptop (so no modifications of any type to the laptop). I was more open to modifying the portable hard drive case, but I wasn't wild about that. Really, that left me only 2 options: suction and hanging hooks--and what I discovered is that the best approach is a combination of both: suction for the portable hard drive and a hook to hang it all from the laptop lid. :) I found a wreath hook at Jo-Ann that is perfect! Check it out: 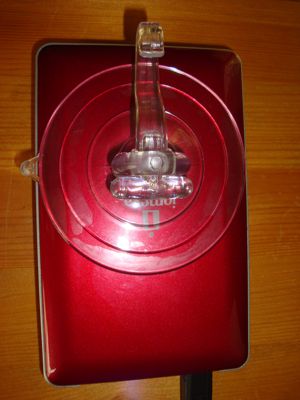 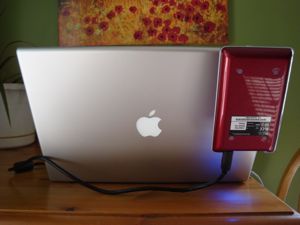 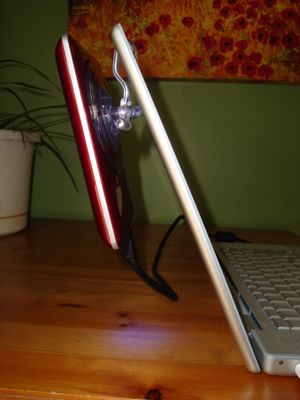 Make Sure USB Connection Not Interrupted When Updating iPhone

So my only choice was to restore the iPhone to factory settings and from there to restore the phone's settings from a backup. I'm not sure that before beginning the update iTunes bothers to do a backup of your iPhone (if it doesn't, it sure should and I recommend that you do your own backup before letting iTunes do a software update), but in any case it seems I was able to restore from a recent enough backup that I didn't lose much, if anything. Because I'm using over-the-air Exchange synchronization, my most imporant data (Contacts, Calendar, Email) are not synced via iTunes so fortunately there was no risk of losing any of that data.

But even though in the end I lost little to nothing, the whole process of restoring is long and a rather big pain in the butt. So for that reason alone, I highly recommend avoiding it at all costs--and that means making sure the USB connection between your machine and your iPhone is not interrupted when you're updating the iPhone's software!

Incidentally, even after restoring from a backup, I had to completely re-do my settings for my Adobe Exchange account (I'm guessing that the certificate for the phone can't be backed up). Also, although my setting for syncing an image directory on the MacBook Pro to the iPhone was still present, the image in the directory (I only have 1 image in that directory) was not on the iPhone until I did another sync and, because I use that image as my Wallpaper, I had to reset my Wallpaper after I synced the image back to the iPhone.

UPDATE: although this post was originally written in regards to running Windows in VMWare Fusion, as pointed out by multiple kind people who have commented on this post, this information is also useful for those accessing Windows through means other than VMWare Fusion including Parallels and Remote Desktop. Accordingly, I have changed the title of the post to include Parallels and Remote Desktop.

Okay, now that I've established the problem, I'll go ahead and explain the solution, then for those interested, I'll backtrack into the details.

UPDATE: there is, at least in VMWare Fusion 2.0, a simpler solution than I originally detailed in this blog post (that original solution and my explanation of the cause of the problem are still included below): go to the Virtual Machine menu in VMWare Fusion and choose Send Key ==> Caps Lock. You'll note while you're there that there are a number of other keys you can send as well; I discovered this whole capability tonight while looking around to try to find a way to send the Insert key (Insert had gotten toggled on in Internet Explorer and I wanted to toggle it back off) which I didn't know how to do directly because the MacBook Pro keyboard has no Insert key.

UPDATE 2012-07-27: this blog post is 2 days shy of being 4 years old and it's still generating comments! One such comment below states "Here is a simple solution (work around) that worked for me for inverted caps lock (same for num lock). When you are on VM or NXClient press 'alt'+'ctl'+'del', then press the caps lock(same for num lock). Then press 'escape'. Hope this works." I haven't tried this but wanted to pull it up here in the blog post in case it's of help to you. Thanks for the tip, Partha.